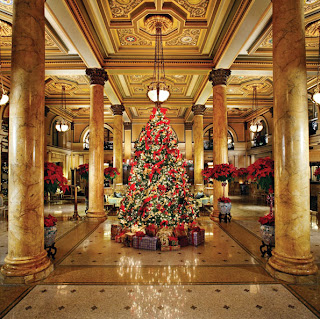 I am in the holiday mood!  I don’t know if it’s the cold air or the christmas music on the radio, but I am really excited about the holidays this year. If you are looking for a bit of holiday cheer be sure to stop by the Willard Hotel lobby this month.  Every day from 5:30 – 7:30pm there will be free performances by the groups listed below.  If I run into you there, I promise I won’t sing!

December 10: Carmina & Illuminare
Chamber choir devoted to the diverse musical styles of the Middles Ages through the Baroque

December 19: 18th Street Singers
Ensemble of young people named after the DC street where most of the members live

December 23: The City Singers
An outreach ensemble of the City Choir of Washington

Maybe you’ve started to hear the buzz? It not often that a historic space is re-imagined, but the Hay Adams has spent the last year creating the most impressive roof top space in DC. The tent is gone – replaced with a permanent ceiling and stunning skylights and a direct elevator all the way up from the lobby. No more hoisting grandma up the last flight of stairs. They can now accommodate 200 with dancing. Click here for a sneak peak. Better get your date booked- this is going to be the hottest ticket in the District when it reopens in January.